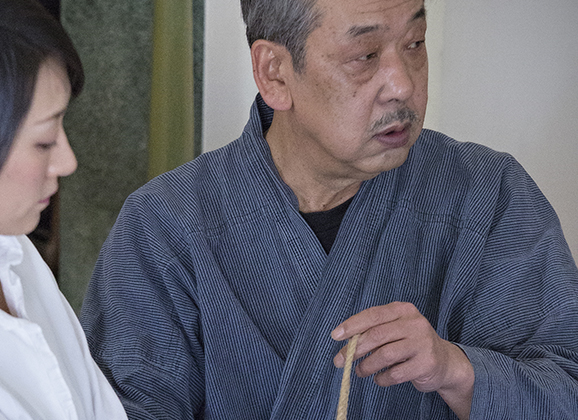 While he was visiting Los Angeles, I had a very long discussion with Akira Naka about how he learned kinbaku.

I have been very lucky to spend time studying with some of the best Japanese rope artists, most recently hosting  Naka Sensei here in Los Angeles.  We spent a lot of time talking about how he learned from Nureki Sensei and the difference between learning in the traditional style in Japan and giving workshops in America.

I have also been accepted into the school of Yukimura Haruki, both as a student and as an instructor of his ryu.  Yukimura Sensei has given me a name, Haru Yutaka, and a license (menkyo) which authorizes me to teach his school of kinbaku.  In have studied with him in the US when visited and many times in Tokyo while visiting him at his studio in Ebisu and at photoshoots in Roppongi.

I say this not to brag, but as a means to give some credentials to what I say about learning kinbaku in Japan.  There are others with far more experience and training and who can probably say these things better than I can.  But what I can offer is, I hope, more insightful than those who love to talk about it without experiencing it or who prefer glib dismissals to actually answering questions, I want to try to explain what makes learning rope in Japan different from learning rope in America.

The first thing you need to understand is that Japan and the US (and most of Europe) are radically different in one crucial aspect.  The US is what Edward Hall, a cultural anthropologist, called a “low context culture” where Japan (and many Asian countries) are “high context cultures.”  That distinction is incredibly important to understand both the languages of these two cultures as well as how things are learned and taught.  That difference determines how we think, what we hear, and how we process just about everything.

In low context cultures, such as the US, the clarity, precision, and accuracy of information is paramount.  What is said is more important than who is saying it and the meaning is expected to be found in the things that are said.

As Brian Wilson summarizes it:

People from low-context cultures value logic, facts, and directness.  Solving a problem means lining up the facts and evaluating one after another.  Decisions are based on fact rather than intuition.  Discussions end with actions.  And communicators are expected to be straightforward, concise, and efficient in telling what action is expected.

In a high context culture, like Japan, the priorities are reversed.  Meaning is derived from the things surrounding the words, which are far more important than the words themselves and silence, as well as speaking, can be used as a very important tool for communication.

In Wilson’s summary, he writes:

According to Hall, these cultures are collectivist, preferring group harmony and consensus to individual achievement.  And people in these cultures are less governed by reason than by intuition or feelings.  Words are not so important as context, which might include the speaker’s tone of voice, facial expression, gestures, posture—and even the person’s family history and status.

So how might this related to teaching kinbaku?  There are two ways, I think.  First, by realizing that woven into the fabric of the art are the assumptions of a high context culture.  The art itself does not translate well to the demands of a low context mindset.  In fact, it can be enormously frustrating.  One interesting thing I have witnessed on several occasions is a bakushi declaring “I never do” something only to witness them do that exact thing only minutes later.  What they are saying is that “in this particular situation or at this time, I would never do a particular thing.”  However, when the situation changes, that thing may not only be acceptable, it may be required!  Very confusing to the low-context mindset.

Which brings us to point number two.  We frequently hear that knowledge in Japan is not “taught” but “stolen.”  Which is exactly what it looks like to a low-context mindset.  It might be better explained as “knowledge isn’t taught, so much as absorbed over a long period of time.”  When you consider a high context art in a high context culture, it begins to make sense.

People in the West will look at kinbaku in Japan and conclude “there is no right way” because they aren’t even consistent.  They will say something in one place and something different in another and wrongfully conclude there is no discernible style, technique or school there.

Most schools of traditional kinbaku are teaching how to do the right thing at the right time in the right way.  How do you know what that is?  The answer that a high context person will give sounds like absolute bullshit to the low context mind.  You just know.  You know because the context tells you.  You feel it.

My experience in taking classes with Yukimura Sensei is exactly like that.  He will simply tell you to do something:  Tie with one rope, with some feeling, Yukimura style.  Then he watches and as a student you watch him.  You know you are doing it well when he becomes engaged and starts to make “encouraging sounds” and occasionally will add an approving “Mmmmm hazukashii.”  Sometimes when I am really making a mess of things, he will stop me and correct what I am doing.  No reason is given and the correction is quite gentle.  All of the “meaning” of the correction is in the context.  If Yukimura Sensei stops what you are doing and shows you something different, what you are doing is wrong.  That will never be spoken, but it is felt. (Sadly, felt quite often by me).

From the perspective of low context, all the teaching happens on the tatami mat, watching and being instructed, being corrected and show approval or not.

From the high context perspective, learning happens over tea, over discussion, even at the moment you are greeted at the door.  In every moment of interaction, you are “becoming a student” and the hands-on instruction is a small part and maybe the most insignificant part of that.

When Naka Sensei visited us in Los Angeles, I learned more about kinbaku from him in our hours of conversation than I did in any lesson or workshop I took, because I was learning the context of his kinbaku, the thing that gave it meaning.

It is also the reason I love to collect books.  I am not looking for instruction or even inspiration from the books I read.  I am immersing myself in a context of kinbaku, which finds its way into all the things I do.

During our workshops in LA, there were times when a student would ask Naka Sensei “why do you do that?”  It could be as simple as a rope placement or the tying of a bow.  Sometimes he would answer “because that is the way Nureki did it.”

To the low context learner, that is no answer at all.  The few people I spoke to felt it meant “there is no real reason” or “it is just the way he was taught.”

But for Naka those choices were part of what define the style.  The “reasons” are so deeply embedded and so enmeshed in the nature of the art itself that it is impossible to separate them into something that can be easily explained.  Naka’s answer–because that is the way Nureki did it–was not saying there is no reason, it was giving you the only reason that mattered, the most important reason.

You can teach technique and you can “share knowledge” but in the end, kinbaku is something that cannot be taught; it must be felt.  Right and wrong are terms that have radically different meanings and significance in high and low context cultures.

After studying with Yukimura Sensei, I would say “right” in Yukimura ryu is in any given situation doing the things with rope that bring about the result that is in keeping with the basic tenets of Yukimura ryu.   “Wrong” is the feeling that in Yukimura ryu you don’t do that particular thing in that particular situation or that you can do it better some other way.  Techniques are a toolbox you can draw on and the more you have, the “righter” you can be.  Being a student of Yukimura means you are spending your time trying to figure out right from wrong, usually by tying.

The same seemed true for Naka Sensei.  He would often talk of doing ties in ways that felt right, looked right, or made sense.  He once told me his biggest confusion about western kinbaku was why some westerners would do things in ties that make no sense.  I told him “because that is how they were taught to do it.”  He nodded and gave a long and thoughtful “ahhhhh” and then I asked him if he understood what I meant and he said “no.”  It led to a very long discussion….