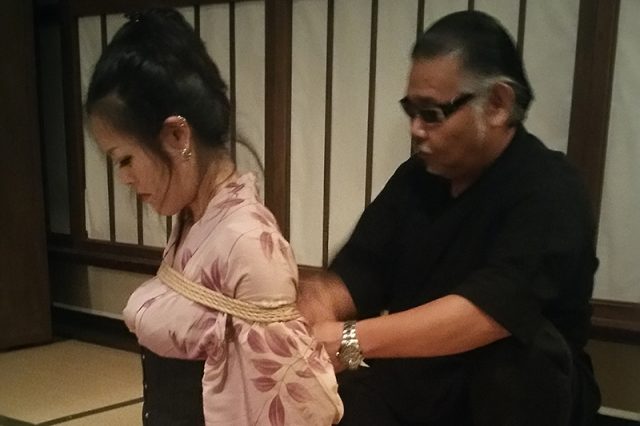 The latest in our series of unique and insightful interviews with the top shibari masters. This interview of Miura Takumi was conducted by Osada Steve and represents another in a line of interviews at TokyoBound which are as illuminating as they are rare.

Osada Steve: You’ve been doing shibari for about 15 years, the last seven years as a professional nawashi. What is it about shibari that interests you so much that you are devoting your life to it?

Miura Takumi: I was first attracted to shibari because of an interest in SM. But the more I learned, the more fascinated I became. I find it intriguing that you can work rope onto itself in so many different ways to form so many unique shapes and structures. I find it very exciting that you can do so many different things with a simple piece of rope. The creative potential is unlimited.

As a professional nawashi, what kind of activities are you involved in?

A wide variety. I do live shows and participate in videos, both under my own label and for other producers. I do ties for magazine photos. I sponsor a rope salon, where people who are interested in shibari can come together twice a month. And I am involved in research and education, with an emphasis on teaching people how to do rope bondage safely and preserving the historical techniques of shibari for future generations.

You are relatively young, in your early forties. Japanese society and technology have changed so much since the early post-war years when the older generation of nawashi was starting out. How do you think these changes affect the practice of shibari today?

Things are indeed very different now than they were thirty or forty years ago, when famous names like Akechi Denki and Yukimura Haruki were starting their careers. SM is somewhat out of the closet now, and the internet has made information about shibari widely available. On the one hand, I think that is a very positive change. I’m glad that many more people now have an opportunity to become acquainted with shibari and all its facets — as eroticism, of course, but also as art and in its historical context as a martial art technique. On the other hand, I am concerned that because the information is now widely available, more people will look at a photograph of a woman tied up and suspended and think, “I’ve got a woman. I’ve got rope. I can do that.” My fear is that such people will injure someone because they underestimate the importance of safety when doing shibari.

Is that why you put so much emphasis on education?

There are two reasons I think education is important. One is to pass on and preserve the tradition of Japanese rope bondage. The other is that in shibari, it’s a human being you are tying. If shibari isn’t done correctly, there is a very real danger of injury. I want as many people as possible to have the opportunity to learn the techniques of safe bondage.

You run a monthly shibari dojo. How is that different from other organized shibari lessons?

In most shibari classes, the emphasis is on one-way instruction. The teacher gives a lecture, demonstrates a technique and then has the students try it once or twice. In my dojo, the emphasis is on practice, just as it is in a dojo for karate or judo. I provide a place where students can practice conveniently and safely with supervision and assistance. I limit the number of students to ten — most are men but we do get female students, too. I provide five to seven models so that each student is actually tying on a woman’s body as much as possible during the two-hour session. Of course, I demonstrate how to do various ties, and observe and assist as needed, but the emphasis is on hands-on practice. When a student feels they have mastered a tie, I test them to see if they can do it safely, correctly and swiftly. If they can, they pass to the next level and work on more difficult ties. It’s quite organized and I issue cards for each level.

So it’s like a certification system. Should there be something similar for professionals? Maybe a series of tests you have to pass before you can call yourself a nawashi?

My dojo is on a very small scale, just ten students at a time. But I think there is great value in passing on knowledge in an organized way. Ideally, I’d like to continue these kinds of activities so that whatever skills and knowledge I am able to gather during my lifetime can be passed on to others who will carry the tradition on and develop it further. And that’s an interesting idea — an association of professional nawashi that could promote safe practices and other common goals. But I think it would be difficult to organize. Many nawashi think of each other as rivals. There isn’t much opportunity to come together and cooperate.

In the West, there are people who say they are doing Japanese rope bondage but they use cotton rope or nylon rope. What would you do if someone showed up at your dojo using rope like that? Would you throw them out?

(Laughing) No, I wouldn’t throw them out. I think it’s okay if people do what they want, using the materials they want, but with one very important caveat: it has to be done safely. And on that point, I’d like to stress that there is a reason that most people in Japan who are serious about shibari use asanawa(jute rope). Asanawa is made of very strong fibers that don’t stretch or give, so ties made with this rope are very strong and stable. The knots stay tight and don’t slip or slide, which makes the entire structure safer than if you use a softer, smoother rope.

What about rope length? Here in Japan, everyone seems to use ropes that are about seven meters long. But in the West, people are using all kinds of lengths. What do you think about that?

Again, there is a reason that we Japanese use seven-meter ropes. First of all, that length goes back to the traditional Japanese measurement system. Although we now use the Western metric system, most of the time Japanese rooms are still measured in terms of tatami mats, which is part of the old system. Two tatami mats together form a unit called a tsubo, and that’s the unit most people use when talking about real estate and land. Now, if you take a rope and run it around the circumference of a tsubo, those two tatami mats together, the length comes to roughly seven meters. So it’s a traditional length. Now, the reason we use that length in shibari relates to the average arm span of an adult man, which is about 1.75 meters. Think of it this way: you take a seven-meter rope and fold it in half, giving you 3.5 meters. You pull it once using the full length of your arms, 1.75 meters, and you pull it again — another 1.75 meters, and then you’re done. It’s the most efficient length in terms of the average adult’s arm span. If the rope were longer, you would spend too much time pulling it.

Okay, but some people in the West do use longer ropes, say 10 meters, and they say they need the longer length because the people they are tying are physically larger than the typical Japanese woman.

I think it’s better to think in terms of what’s most efficient when you’re tying rather than the size of the model. You’re a Westerner, and quite a tall guy. Let’s stand up for a moment and compare our arm spans. See? Almost the same. So in terms of the pulling movements used in shibari, a seven-meter rope would be more efficient for you than a 10-meter rope.

Thank you for that very interesting explanation. Okay, let’s get back to you. How would you define your style of rope bondage?

It depends completely on what I’m working on. For a live show, the rope work needs to be bold and acrobatic, like a magic show, because most people attend a performance to be entertained and impressed. If I’m working for a photographer or video director, I adjust my rope work to their needs. But if someone says, “Go ahead and do what you like,” then I’m going to do semenawa (torture rope) because that’s what I like the most.

You are now producing your own videos under the Bakuyukai label. How would you characterize those works? What are you trying to do with them?

I have a growing number of videos out under the Bakuyukai label. They all have various SM training scenes, but the main emphasis is always rope bondage. For my own videos, I develop a strong story line to provide a context for the bondage and training. As much as possible, I try to show the emotional interaction between the man doing the tying and the woman being tied. For example, the title Meibaku Yado is a story about a woman who runs a traditional hot springs inn and a maid who works there. The two women don’t get along and their poor relationship causes many problems. A man gets a hold of them and puts them through difficult training to force them to set aside their pride and petty grievances so they can work together in harmony. In one scene, the two women are bound together and thrown into water where they have to cooperate or both will drown.

You have a strong interest in hojojutsu. Can you tell us about your activities in that area?

In the Sengoku period, when there were various civil wars going on within Japan, there were as many as 18 different martial art schools (ryu ha) that developed their own secret techniques for using rope to capture and secure enemies. Although those techniques were refined and preserved over many centuries, by now at least half of the schools have died out completely and their knowledge was lost. No one really knows what the current situation is. However, a very few texts and illustrations survive and I am studying those.

First and foremost, I want to preserve what little knowledge we have left. Ideally, I would like to write a book about hojojutsu that would remain as a record for future generations. However, working from the old texts and illustrations is an imperfect process — when you look at an illustration of a finished tie, you can only guess how it was constructed. So I wouldn’t be able to present a tie as the knowledge of such and such school of hojojutsu. I can only say that it’s my best guess, based on trial and error, of how the tie shown in such and such an illustration was constructed. At the very least, I’d like to help people understand that hojojutsu is the basis of the shibari we practice today in the narrow context of SM.

Everyone hopes to make a contribution to his or her profession, to leave a mark on the world. How would you like to be remembered?

If I am remembered for anything, I hope it would be as someone who tried to protect and preserve our unique tradition of rope bondage. I think it’s fine if people try new things with shibari, as long as they do it safely. But for myself, I want to follow the path of tradition.

The original URL is here: http://www.tokyobound.com/blog/?p=162

Bakuyukai / 縛友会. In 2005, Miura Takumi (神浦匠) organized an afternoon of kinbaku performances in honor of grandmaster Akechi Denki (明智伝鬼) who had just passed away. semenawa.com