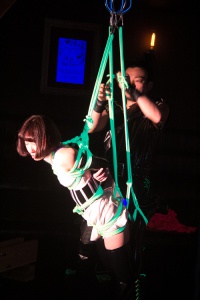 On May 14th, Hajime Kinoko and Ika Chang performed at Bootie LA, a night club event on Sunset.  The performance was one of Kinoko’s signature cyber rope performances, with glow in the dark rope and dramatic suspensions and poses.

It was a spectacular show to watch, for a few reasons.  First and foremost, for those who have never seen Kinoko tie, he is a master technician.  His style is extremely fluid, fast, and very precise.  He is able to give a great show without being “showy” (even while dressed head to toe in shiny black PVC clothing, accompanied by a beautiful model in latex).

The show itself, which is my second point, had a strong sense of coordination, consistency and flow.  For want of a better phrase, it knew exactly what it was and it felt like it had the heart and soul of both the participants on full display.  It was a spectacle, no doubt.  It was also something more than that, it was a highly coordinated performance between a master artist and a very talented rope bottom.  Ika’s skill was as masterful as her partner’s, holding some very tough poses and moving fluidly between them.  That balance was, for me, an important part of the show and something I really focused on while watching them.

But none of that is what made the show special to me.

The larger point I want to talk about comes from my own experience watching a number of rope shows, both here and in Japan.

The best shows I have seen are ones in where I could feel the performers, their energy, their intent, their spirit.  Comparing Kinoko’s cyber rope to Naka Akira’s intimate semenawa or Yukimura’s aibunawa performances comes across at first like apples and oranges.  But if you consider it from a different point of view, there is a deeper question to consider.

I wrestled with the idea of calling it something like kinbaku criticism, but I think the term I prefer is kinbaku appreciation.

What does it mean to truly appreciate a kinbaku performance?  The first thing it means is getting ourselves outside of the concept of our own practice.  When we watch kinbaku as tops or bottoms, we are always thinking, at least at some level, what can I use here?  How can I take what I am seeing and incorporate it into my own style of tying or bottoming.

There isn’t anything wrong with thinking that way, it just is not what I mean by appreciation.

The second thing we need to do is understand that technique, the actual ties themselves, are secondary to a larger spirit or feeling.

A number of years ago, I had the honor of attending a memorial service to commemorate the passing of Oniroku Dan.  The performance that night was given by Naka Akira and Iroha Shizuki.  It was especially interesting because there was no hard point in the venue and the performance was entirely floorwork, which is a very atypical for Naka’s style of rope.  What transpired however was exceptionally beautiful.  I felt as if I was watching a love story unfold before me.  By the end, many in the audience were moved to tears.  Me?  I actually just had something in my eye….

Several years later, I couldn’t tell you what ties he did or what poses she was in, but I can recall in almost visceral detail the emotions that performance evoked and the beauty of it.  The rope part mattered, but only as a vehicle for part of a larger story, a deeper sense of feeling and emotion that defined their interaction.  The gift of that show was them letting me see a part of who they were.

Not every performance need takes us to those kind of deeply emotional places.

When I watched Kinoko and Ika, I could feel both of them coming through the performance, their personalities and their spirit.  Playful, dramatic, fun loving and full of life, their show expressed who they were just as deeply as Naka and Iroha were able to reveal who they were.  These were different facets of kinbaku for sure, but in the diversity of what we do, each has its place and each is as valuable as the other.

The challenge, I believe, we face in the West is not improving our technique.  By most objective standards, our talent as riggers is on par with anyone else in the world, including Japan.  But my experience in Japan, both as a student and as an observer, makes me think we still missing something essential, even fundamental.

During my last visit, I spoke with Chiba Eizo about his impressions of kinbaku in Japan and in the West.  He told me that he felt that in Japan, tying starts with the heart and uses technique to express that.  In the West he said we start with the technique and eventually hope to find the heart.

In that sense, I think kinbaku appreciation gives us a way to think about what kinbaku means to us in a broader sense.

Watching Kinoko and Ika, I realized that without that sense of heart what they were doing would be just another rope show.  What elevated their performance and made it more than just a series of ties, suspensions and transitions, was a sense of purpose, intention, and spirit.

Years from now, I probably won’t be able to tell you what ties they did or in what order they did them, but I will always remember the way their rope performance made me feel.  Creating that is much harder than it sounds. Understanding that and using it as a lens to view kinbaku performance is, I hope, the beginning of a discussion of what kinbaku appreciation might look like.

I will always be grateful to Kinoko and Ika for sharing that performance, because not only did it allow me to see a part of who they were; it showed me something new about myself.

When it comes to appreciating kinbaku, I can think of no higher standard than that.

All images courtesy of Shutter tribe.