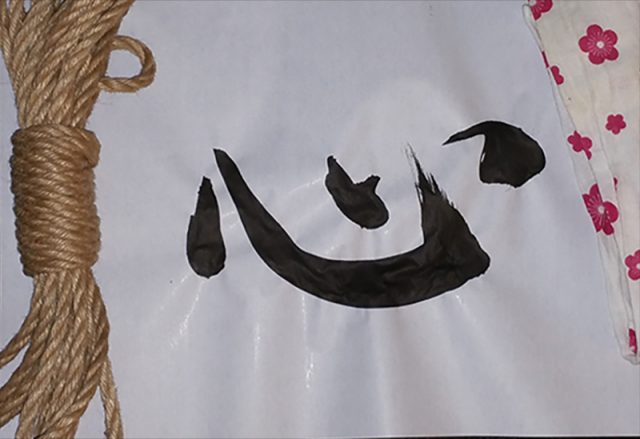 At the beginning of December I visited Japan.  It was a trip that was a personal journey for me for a lot of different reasons, not the least of which was an effort to try to answer a question that has been running around in my head for a very long time:  What is the heart of kinbaku?

The word frequently used in Japan for heart is kokoro.  It means heart, the same way it does in English, with the nuance of spirit, strength, essence.  Just as we might say someone has a lot of heart or we are getting to the heart of the matter, in Japan you might use kokoro to express a similar feeling.

The question was important to me for many reasons, not the least of which is my own desire to explore kinbaku at a level that fulfills me at a deeper level.  So asking this question: “What is the heart of kinbaku?” was something I was hoping to answer for myself but also something I was hoping I could share in my teaching and workshops with students.

When I got to Japan, I asked a number of people the question and I was answered with the kind of responses that makes one think I was not being completely understood.  Either I had asked one of those questions that is so deep and profound that answering it is impossible (such as “what is the meaning of life?”) or I was asking a question that didn’t make a lot of sense to the people who were trying to answer it.  I hoped it the was the former, but suspected it was the latter.

The responses varied across the board, but they were all fundamentally unsatisfying.

Until I came to a stark realization a few weeks later.  What if I was asking the wrong question?

As I began to reflect on the answers I got, I came to realize that perhaps I had framed the question in the wrong terms.

With that shift in perspective, the answers I received became much more clear.  If kinbaku is a tool for the expression of one’s own heart and a means to find and open the heart of another then asking about its heart doesn’t make very much sense.

There is something uniquely human about shibari and kinbaku.  For me, that is emotional connection, that is heart.  Every heart is, of course, different and every tie is a different expression of one’s heart.

In the West, it seems, that we all too often spend our time giving classes, workshops, and lectures on the tools, with not enough understanding of why we are using them.

While a paintbrush is an essential ingredient in creating a great work of art, it is no more than the vessel or tool that the artist uses to communicate something inside him or herself and share it with others.

Perhaps the most important lesson from this trip to Japan for me was that the heart of kinbaku doesn’t reside in rope, our teachers, or Japan.  It resides in each and every one of us.  It was with me all along.  It took a trip to Japan, 5000 miles away, to finally understand that my kokoro is always with me, no matter where I go.  The hard part, the journey, is discovering it in yourself and learning to use your rope, your ties, and your skills to share it with another.