In 1996, Akechi Denki and Miura Takumi founded Bakuyukai for the purpose of studying and teaching kinbaku.  With Akechi Denki as the group’s Founder and with Miura Takumi as the head instructor, they created what would become the first rope dojo in Japan.

The model developed for bakuyukai was a different approach to teaching, based on how students had been learning and advancing through the ranks of martial arts such as kendo.  In fact the bakuyukai webpage makes a point of distinguishing the dojo space as a place of learning and mastery, commenting that no one will beat you with a shinai (bamboo sword), as some might find the association with martial arts a bit scary.

Bakuyukai was founded, according to Miura sensei, to create a different style of learning.  Most of what was being taught at the time was happening in workshops or “Kōshūkai” (講習会). A Kōshūkai is a gathering where a single tie or set of ties is taught to a group of people.  Everyone might gather together, for example, to learn how to tie a gote.

Bakuyukai developed a model where groups of students of varying levels could meet and work on different things in the same space.  The advantage of this, Miura sensei says, was that more junior students could see the development of more sophisticated kinbaku and it would help shape what they were learning even at the earliest stages.

Dojo sessions would have no set curriculum, but instead would allow each student to work on their own ties at their own pace.

Once a student felt they had mastered a set of skills, they could asked to be tested and would then be awarded a rank within the dojo, starting with a beginner rank, moving through three skill levels, and ultimately reaching the rank of instructor.

Progression through the ranking system would rely on being able to complete the ties correctly and within certain time frames which would become increasingly more challenging as skill levels progressed.

While skill and efficiency are important Miura sensei continually emphasized what matters most is safety and making sure that students learn how to avoid and prevent injuries in rope.  For that reason suspensions are not part of the curiculum and are only taught by Miura sensei in a one to one setting as private instruction and only after students have mastered the basics. 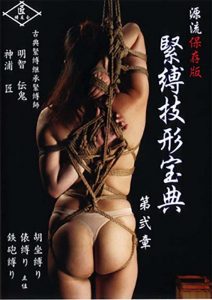 In 2005-2006, Akechi Denki and Miura sensei put out a 4 volume video series of instructional videos focused on the process of tying.  At the time, Akechi and Miura felt that videos were too focused on the end result of ties and that they wanted to create a series that focused on the process, more than the end result.  Strictly speaking, Miura says they lack the specificity of a true “how to” video (which is why the packaging contains a disclaimer in Japanese), but he understood that people would use them as a resource to learn how to tie.

For those who can’t make it to Tokyo to learn from Miura sensei in person, these videos are considered by many to be some of the best instructional content produced in Japan.