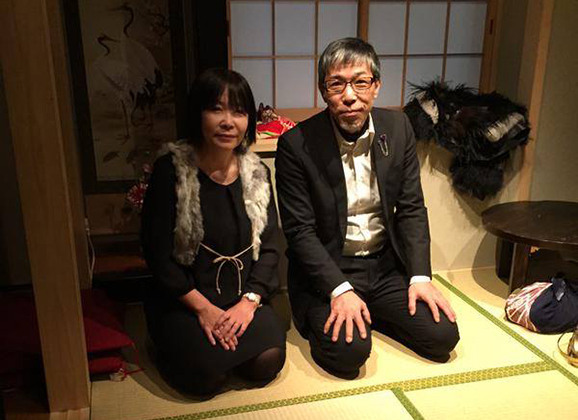 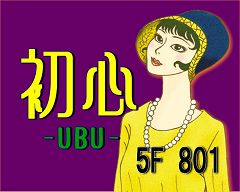 Two small adjacent bars in Shinjuku, Tokyo have become shrines to the spirit of traditional Japanese rope-play: Bar -UBU- opened in February 2012, followed by -mitsu- in December 2013 run by Shigonawabingo san and Yoi Yoshida san. I was given the pleasure of interviewing Bingo and Yoi, and attempting the task of explaining their responses in English.

Sin: Bar -UBU- and -mitsu- have become important places to go to experience traditional Japanese rope-play, and are visited by increasing numbers of foreigners. Do you welcome these foreign guests?

Bingo: Firstly, it is a great honor to hear you say -UBU- and -mitsu- have become shrines. Yes, foreign guests are very much welcomed. Kinbaku (rope-play) is a Japanese culture, but only human beings are able to make up a culture, and because humans can make these exchanges, culture becomes borderless.

Sin: How important is Japanese culture and etiquette to the concept of – UBU- and -mitsu-?

Bingo: One of the concepts of -UBU- and -mitsu- was to build emotional connectivity and bonds between people without the thought of private gain or of making business. Historical Japanese culture and etiquette give weight to emotional connectivity between people, and their way of being, and this is closely related to the concepts of the two bars. However, culture always changes with the times. People inherit good things from history, and also embrace new things in accordance with the evolving situation. This has always been so.

Yoi: I’m not particularly conscious of our native culture, apart from the tradition of taking off the shoes when entering the bar.

Bingo: It’s said that the origin of Kinbaku is Hobaku (tying criminals with rope). But, as you can see in Shunga (historical Japanese erotic paintings), there was always a propensity of rope-play during sexual activity since ancient times. Nowadays, most Japanese men want to learn Shibari for sex, including those who can achieve satisfaction without penetration, and there are a few people who do Kinbaku in order to satisfy sado-masochist appetites. These people can satisfy without using ropes. The Japanese tend to conceal sexual activity compared with Westerners. So even if a Japanese says that his Kinbaku is an art or a performance, it might be for sexual activity. It is maybe because we Japanese have in our nature the difference between what one says and what one thinks, our camaraderie, and our inability to say ‘No’.

Recently, the number of women who want to learn Shibari has been increasing. Most of them are aiming to having communication by physical contact. However, please do not misunderstand. I said that most Kinbaku in Japan is aimed at sexual activity, but this does not mean that they are aimed at sexual penetration itself. We can achieve sexual activity only when we have the best connection, and we need excellent communication in order to make someone devoted and then enslaved. Skill with rope is only part. What matters most of all in Kinbaku comes from the heart.

Sin: Would you recommend visitors to learn some Japanese before they visit -UBU- and/or -mitsu-?

Bingo: It is not absolutely required. But, understanding each other does encourage a sense of affinity and reassurance. On the other hand, we may feel something without the use of words. This is one of the reasons that Kinbaku is so fascinating.

Yoi: I think that you will have more fun if you can speak a little Japanese, as this encourages mutual understanding (rikaishiau). But we become friends through our common passion for bondage.

Sin: Do you have staff that can communicate in English?

Bingo: Unfortunately, we don’t have staff that can communicate perfectly in English. We can exchange the odd word, but not deep conversation. However, some of our local guests can often speak English.

Yoi: When it seems necessary, we have asked for an interpreter to come and help.

Sin: How do you feel about non-Japanese interest in traditional rope-play?

Bingo: I feel it’s a very wonderful thing. But, there seem to be two prominent types – people who think that rope-play is an art and/or performance, and people who think of it as an inner psychology and communication. Kinbaku may be the latter. It seems that many prefer the former, or even misunderstand the former as the latter.

Yoi: I think that it is a good thing for foreigners to want to know different bondage and restraint techniques.

Sin: Do you enjoy encouraging and teaching rope-play to non-Japanese?

Bingo: Yes, I really enjoy it, regardless of nationality. Satisfying inquisitive minds, and living up to expectations also helps me to learn more about myself, and this is thoroughly enjoyable.

Yoi: To convey the finer nuances can be challenging, but always fun.

Sin: Is it important to Japanese people what traditional SM rope-play is named (Kinbaku/Shibari)?

Bingo: It is only important for people who need a name for it. But, any name should not be imposed. However, before learning the skills, techniques, and knowledge of rope and tying, there are many more things that we should learn as a person in order to fully understand Kinbaku. In that sense, I think it is good to know a name for what we do, even though you don’t really need it.

Yoi: I do not think it is important to many Japanese what it is called. I don’t know if it is really important for lovers of SM.

Yoi: Yes, people who have attended these festivals seem keen to see these formats outside of Japan. But, because they are non-profit making events this may limit the possibilities. It must be stressed that even professional performers attend to mutually enhance rope-play without reimbursement, encourage by showing different ways to make bondage, and even help to sell drinks at the bar, act as receptionists, and clean up afterwards. If there are people who understand and appreciate this and can facilitate, then yes, these kinds of events can be held in other places. Currently, events are organised in Tokyo, Osaka and Nagoya, and February this year an event was held on the Gold Coast, Queensland, Australia. I think that without having to stick too closely to what is perceived as Japanese bondage, that people of other countries can bring their own styles, and this is a great thing.

Bar –UBU- and -mitsu- can be found at 1-4-12, Kabukicho, Shinjuku-ku, Tokyo. Take the Tokyo Metro Marunouchi Line or Fukutoshin Line, or Toei Shinjuku Line to Shinjuku Sanchome Station and exit via Gate B9. At street level head left 100m and cross the busy Yasukuni Dori street. Both bars are a further 80m on the left, together on the 5th floor. Check www.bar-ubu.com for opening times and entry charges.