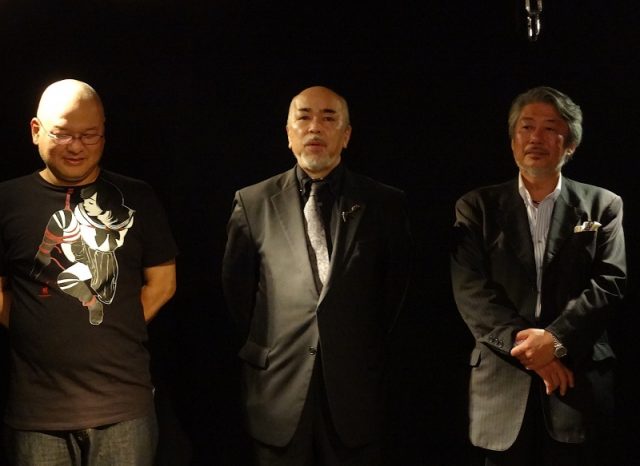 This was my first ever Shibunawakai: a Nawakai rope-play gathering organized by Aotsuki Nagare san, Kazami Ranki san and Nawanojyoh san, usually held in the Kansai region of West Japan. The three are well known professional Bakushi actively practicing all over Japan. Watching their rope work literally within centimetres of them, and additionally their positive interaction with the attendees was indeed wonderful.

‘Shibu nawa kai’ means simply, a Nawakai (rope meeting) of shibui (dandy, well-dressed men), where young people and beginners are welcomed, and where all the participants are encouraged to tie or be tied in their own way. I believe that this may be the only rope meeting in Japan at which professional and amateur enthusiasts enjoy rope-play together just for fun.

The 42nd Shibunawakai was held on Sunday July 12th 2015. They are usually held about once a month. This was only the third time that it was held in Tokyo, as nearly all of them are held in the west of Japan. The Tokyo Shibunawakai has only been held about once a year, and so many people come, especially women. At this Shibunawakai there were around three times as many rope bottom girls without a partner compared to rope tops, and I believe I understand why – it usually requires a lot of courage for a female rope bottom to attend a rope meeting alone. However, I felt very comfortable at Shibunawakai.

I should explain a Shibunawakai specialty – Nawa nawa ken. This is a ballot ticket allocated to rope bottoms. The rope bottom writes down a rope top’s name and then returns it, and the rope top must then tie the rope bottom without the power of veto. I found this a fantastic idea, and a lovely system for rope bottoms. Even the most shy girls who cannot directly say, “please tie me up”, found that deciding which rope top they would like to be tied by and giving them their vote was a lot easier. Moreover, I think most rope bottoms hesitate to ask rope tops when they seem to be busy. But with the Nawa nawa ken system, rope tops let rope bottoms know when they are ready and available. The number of times is also not limited, so a rope bottom can use the tickets as much as she wants. However, since the number of rope tops is limited, there might not always be enough time for everyone. But, since there is no expiration date for the Nawa nawa ken ticket, the rope tops promise that if you go to their place at a later date and show the ticket, they will tie you up. This shows that they really wish to grant the rope bottoms’ desires.

Well, so much for preliminaries. Now I would like to report my experience as a rope bottom at Shibunawakai.

When I arrived at the meeting place at the stated time, quite a few people were already there, talking about rope bondage amongst themselves. I looked for an available space and joined a conversation. Then the greetings from the three hosts, Aotsuki Nagare san, Kazami Ranki san and Nawanojyoh san started. After the greetings, some people got straight into their rope-play. Rope tops were in serious mode, and the rope bottoms were fascinated by the world of Kinbaku. As for me, I was watching people’s rope work while enjoying chatter with friends. Wow! She is the model who made an appearance on that show! Oh! Her rope pattern is so beautiful! And right before my very eyes, two handsome young Bakushi were deep in their Kinbaku world in such close range. In such a situation, I believe we should not just hesitate and be silent, but speak to them after everything settles down. Not for talking up one’s self, but for showing respect for their rope work. Because people coming to rope meetings would already have thought that they want to have a relationship with a rope enthusiast, and don’t particularly care if it is with an expert or a beginner. At least, Shibunawakai was that kind of rope meeting.

While I was delving deeper in my exchanges with the attendees, Nawanojyoh san came straight up to me… well, because I passed a Nawa nawa ken ticket to him. But I really felt like he wanted to tie me up, even though it is I who had asked for it. I felt like I was becoming a princess, and I really appreciated it. It was actually the first time I had ever met him, but Nawanojyoh san was kind enough to ask me some questions and instill a feeling of relaxation. I told him that I feel fear when I am tied too tightly, I have a small amount of experience of suspensions, but I am vulnerable to pain, and I cannot hang upside down. However, I am attracted to the world of Kinbaku… as a matter of fact, even if I do not completely understand what it is that I really want. But I was so glad to have such a valuable opportunity.

Doing the gote-shibari, Nawanojyoh asked for occasionally confirmation if there was any part that hurt, as he put the ropes to my whole body, and while we were at it, it transformed into a suspension.

Throughout this experience, I felt that the rope meeting might a little bit like a ballroom dancing tournament, since many people were dancing around at close range, we needed to pay close attention to make sure that the ropes did not hit others or that we didn’t bump into other people when changing postures. In order to avoid them, people were aware to pay attention to the movement of each other while concentrating on their own rope work. I really appreciated that such beginners had the chance to enjoy dancing in this world of Kinbaku by being guided by these experts.

After that, I watched more people’s rope work until the time I had to leave. Some of the rope bottoms used the Nawa nawa ken tickets several times and were tied up several times. I do not have such physical strength. But, I saw that the rope tops must be much more tired than the rope bottoms. It was a fantastic sight to see people doing this rope work one after another with such stunning handling. Among others, there were so many Nawa nawa ken passed to the three hosts. Aotsuki san said he kept tying for another 12 hours until the after-party ended. I really respect them and their stamina.

Watching and experiencing their superhuman rope work at close range, meeting my friends, and making new friends was really an incredible time. I look forwards to the next chance.