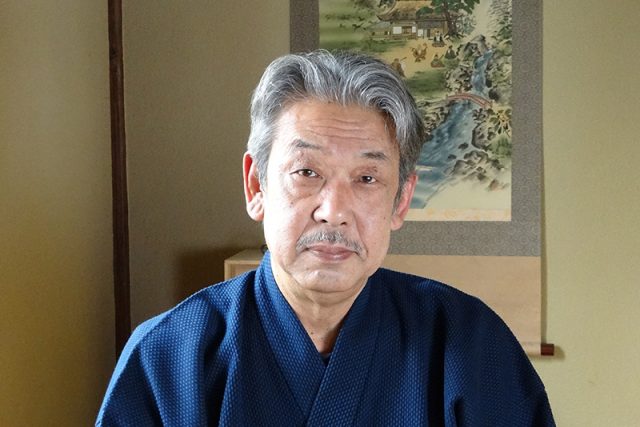 Generously shared by Osada Steve sensei on the memorial day of Yukimura Haruki sensei’s passing.  It is our hope that today be filled with many wonderful memories of Yukimura sensei and that we recall the joy he spread in the world, both through his rope and his wisdom and humor.

The following interview at Osada-ryu HQ was conducted by SM Sniper shortly after grandmaster Yukimura Haruki had passed away (March 3, 2016).

Sniper: Since the last time we talked, has your kinbaku changed?

Osada Steve (OS): Yes, it did. Mainly thanks to Yukimura sensei’s influence.

Sniper: Last time (about 10 years ago) I asked you whether you were a kinbaku master and your answer was: “No, not yet, it will probably take me another three years”.
OS: Haha. Well, that was a mistake. After those three years, I realized it would take me yet another three. And then another, and still another. But now, after almost twenty years on the job, I finally feel my kinbaku has reached a reasonably good level.
Sniper: Last time we talked was right after Akechi Denki’s death (in 2005). This time, I would like you to talk about Yukimura Haruki sensei.

OS: It will be my pleasure.

Sniper: Within the last ten years or so, it seems that kinbaku has quickly spread overseas. How do you evaluate Yukimura sensei’s influence in the West?

OS: Sensei’s kinbaku is a soft, floor-based style with strong emphasis on eroticism and connection. This appeals to a wide segment of foreign rope lovers. Through special workshops in Copenhagen, Los Angeles, Sydney, and Melbourne he could directly touch the hearts of hundreds of students abroad.
Sniper: When Yukimura sensei talked about his kinbaku, he often said that it was not only the technique, but the mind that is important. How is this point received overseas?

OS: A lot of shibari is practiced as a restrictive discipline (semenawa, power exchange) – in the West as well as in Japan. By contrast, Yukimura sensei’s shibari leaves a lot of room for the tied person’s body to move. Such freedom allows for a special kind of deep emotional exchange.

Through the caressing way of applying ropes, through closeness, and through non-selfish touching, sensei’s style is meant to make the woman feel good, feel appreciated, feel genuinely understood. Therefore, for all its attractiveness and beauty, there are many westerners who would like to follow this style.

Sensei’s approach may look smooth and easy, but is quite complicated to master. After studying with sensei for a long time, I think it’ll take me another three years to get good at it. (laughs)

What Yukimura sensei calls “mind” can be taught, thereby becoming a technique of sorts. It’s just that this “mind technique” takes a lot longer to fully grasp and apply than learning rope patterns.
Sniper: I think that you were acquainted with Yukimura sensei for more than 15 years.

OS: I met sensei for the first time in 2001, and then kept following him and watching him work whenever I had a chance. For example, I kind of chaperoned at the shooting for the Akai Hana book, when he tied Asagi Ageha.

Finally, in 2007, sensei accepted me as his student. I worked very hard and in 2012, I became the first person to receive an instructor’s license in Yukimura ryu. http://www.tokyobound.com/blog/?p=396
Sniper: Could you elaborate on the charm of Yukimura sensei’s kinbaku?

OS: Sensei’s gift was to bring out the true feelings in his models and let them reach their full potential. I never saw sensei use a whip or deliver pain. Instead he focused on inflicting pleasure.

In other words, sensei’s kindness and compassion brought about beauty, love, and happiness whenever he touched rope.
SM: Do you feel like you took over these concepts?

OS: I guess, I follow sensei’s modus operandi very closely because a) it suits my character and b) sensei opened my eyes and trained me well to become his shihan (master instructor).

I’d say I have inherited the spirit of sensei. I have been touched by his soul. Sensei has shown me the essence of how he approaches kinbaku.

Since tying people is my job, I can totally tie in the hard semenawa style of Akechi Denki. However, from the very beginning, Yukimura Haruki’s softer style has always suited my character better. To show deep empathy towards the model, there is no space for self-gratification or egoism. First and foremost the model’s needs need to be met, and through this, one derives satisfaction for oneself. This way, it becomes a “happy together”. (laughs)

This way of thinking is what sensei has imbued me with. When a beautiful woman comes to you, one must not primarily seek gratification. Of course, in the field, one cannot always avoid such desire. (laughs)

Sniper: Can you maybe tell us a personal memory you have of Yukimura sensei?

OS: To me sensei’s models come across as what they call Yamato-Nadeshiko, women that are docile by nature and who look beautiful in kimono inside traditional Japanese houses. They look so lovely that you want to make love to them.

In contrast, in the semenawa genre for example, you see women put under duress, suffering, so that you want to hurt them some more and then f**k them.

Yukimura sensei always took care to make sure that the model enjoyed herself. This is what I fell in love with and this is why I kept following my desire to be accepted as his student. When my request was finally accepted, I was truly happy and studied vigorously. The encounter with Yukimura sensei changed my life. His philosophy was something I had never thought about up to this point. It is very strong and gentle. Those who do newaza in a gentle way are stronger in their heart/mind. I can say that Yukimura sensei was the strongest man in the world. You ask why? Because he was truly gentle towards the women… Well, this is what I think at least.

When one reads the reaction of a model, one easily feels whether she likes or dislikes pain, whether she craves for being spanked or rather prefers being cuddled and caressed. Yukimura sensei never made it his objective to hurt his models. I think this is because he hated any kind of duress inflicted on his models.

Sniper: If there is a concrete anecdote, would you mind sharing it with us?

OS: Yukimura sensei said, “When a model asks for pain, just add another rope, and if she still asks for pain, keep adding another one and another.” This way the model will eventually be satisfied by rope, and, at the same time, your own tying will also improve. There is no progress in your life as a bakushi if you succumb to desire and temptation. Yukimura sensei said on one occasion, “If the sex is good, there is no rope. Do rope. Rope should always come first.”

Since our view of things is influenced by how we grow up, it is hard for us to reach a selfless state of mind. Yukimura sensei is one person I met who could make unclouded discoveries and instantly understand the true quality of the person in front of him. I have seen these encounters on several occasions, and I think this is what makes him an outstanding person, a true sensei. I think one can say that his open-mindedness and kind heart made it possible for him to reach this unclouded state of mind.

Sniper: After having received these teachings, what kind of bakushi do you want to become? What path would you like to go?
OS: Firstly, I would want to feel satisfied with the level I have reached, in a technical sense. Regardless, I will continue to study hard and constantly keep refining my skills.

Because I have also grown older, I want to have a heart as gentle as Yukimura sensei, not looking down at people who are still struggling and learning. A true sensei like Yukimura sensei does not argue about each and every thing. (Akechi Denki sensei was also like that.) I aim at becoming a person like Yukimura sensei in all aspects of life, not just in kinbaku. I want to become a mature person who does not always say “This is wrong and that is wrong”. (laughs)

Sniper: Would you mind telling us your age?

OS: (laughs) I’m probably the oldest among the professional bakushi in Japan. Yet, inside my head, in my heart I’m still like a little child. I’m content with where I am at in my life. Age doesn’t matter.
Sniper: Your dojo, Studio SIX, has been operating in the same location for about 15 years now, isn’t it?

OS: I started it together with Osada Eikichi sensei in 2000. Over there (points to the ceiling) was sensei’s favorite suspension point.
Sniper: I assume you are having many students?

OS: There are certified instructors running Osada-ryu dojos in Europe, North America, and Australia. Combined they have a good number of students.

At my own place I mainly offer intensive training to visiting overseas students. Kinbaku can become really interesting once you start exploring the inner concepts. For example, the precepts that I call the Nine Gates of Osada-ryu. These are the intangibles that can only be passed on verbally.

I think my students appreciate that I can pass on the philosophies of Osada-ryu in a language they understand.
Sniper: Will you continue to advise foreign students?

OS: I think so, yes. Ten years ago, foreign students were rather rare, but these days I am fully booked around the year.

These days the majority of students visiting me in Tokyo are those who have been selected by the head instructors from overseas Osada-ryu dojos. As the number of rope lovers wishing to study increases, I need to be selective of who to accept, because the hours one can teach per day are limited. I wonder if this trend will last. I feel like I’m working eight days a week. (laughs)

Sniper: What message do you have to our readers?

OS: Keep your heart gentle. Do not get lost in patterns and technique. The important thing is to enjoy rope together. Not the technique, but the heart is the most important thing.

Sniper: This is a mix between Osada-ryu and Yukimura-ryu, isn’t it?

You can find the Japanese version of this interview here.