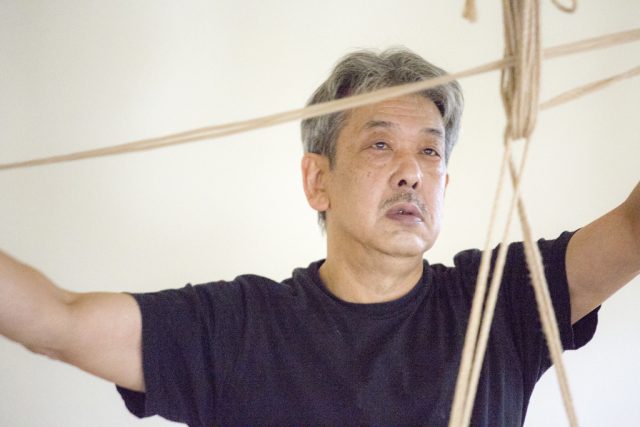 I met Yukimura sensei in 2010.  It was a brief meeting and I was a bit starstruck.  I left his apartment in Ebisu that day with a signed copy of Transbody Bondage, which signed with brush and ink.  I hadn’t learned of his passion for shodo yet, so it was a surprise to me.  He also gave me a gift of photo images, stills from the movie Bakushi, which I framed and keep in my home dojo area.  He was nice enough to let me take a few pictures with him.  I didn’t know it then, but that would be a turning point in my life.

Not long after, I was back in Tokyo, again sitting in his apartment in Ebisu, sipping tea and discussing arrangements for him to visit Los Angeles and teach workshops.  It was the first time a Japanese rope master would come to the US to teach and it was a complicated process, more than we even knew.  What only a handful of people knew at the time was that he had been diagnosed with the illness that would ultimately claim his life 5 years later.

Against what was probably good advice, he still came to LA and taught.  He had given his word and he was not willing to break it, even though no one would have thought twice about it if he had.

That trip changed my life.

I had so many questions and got to spend two weeks which him, undoubtedly testing his patience and inexhaustible good will.  I learned more about rope from spending time with him talking than I did in all my lessons combined.  That was a pattern that would continue throughout all of our interactions over the years.

Yukimura was a genius with rope.  He once told me he knew more than 100 one rope ties and I would always be amazed at his creativity with his ties.  He had spent his life stripping away everything that wasn’t essential to each and every tie.  One rope would often be enough because every inch of it mattered, it told a story, it expressed his feeling, it brought his ties and his essence to life.

More than that, however, Yukimura was a genius with people.  Students, models, fellow bakushi, friends.  They all met a man who was tireless in his commitment to sharing what he loved about the world.  Always with a smile, a kind word, a gesture or an exclamation of “hazukashii!” when you had gotten your tie just right and produced the effect we were always looking for.

My last visit with sensei was in December of 2015.  We had many long discussions during that visit, but one in particular stuck with me.  One of the things that I had wanted to talk about was devoting my dojo to a Yukimura Ryuu dojo full time.  It was in many ways a scary conversation to have, but he quickly set my mind at ease.  Yes it would be fine, he told me, but there was something I needed to know.  Students will come to you and rope will make their relationships better, but for some it will become the thing that splits them up.  You must be ready for this and you must always take care of your students.

Over my years learning from Yukimura sensei, I learned about rope, psychology, play, and emotion.  But more than anything, I learned how to be a better teacher, how to share what I learned and how to do it with a spirit of love, generosity, and humor.   Yukimiura knew how to take care of people, whether they were models, students or fellow bakushi.

In Japanese, when you meet someone you can say “yoroshiku onegaishimasu.”  Like many phrases in Japanese it can be translated many ways.  One of those ways is “Please take care of me.”

When I think back to the time we spent together I can think of no better summary of my experience with the man I was privileged to call sensei.

In memory of his passing, words fail me.  The best I can do it this:

“Thank you for taking care of me, sensei.”