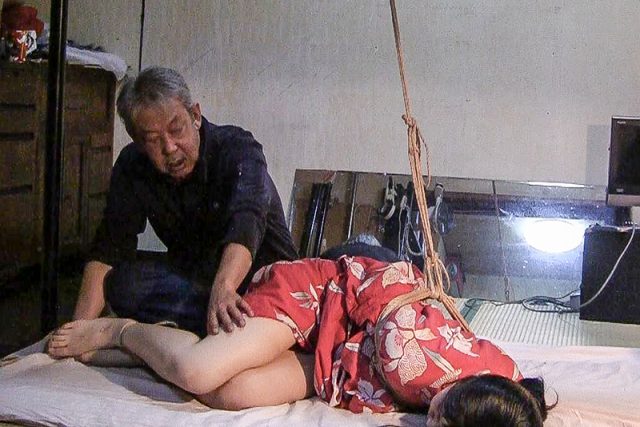 A lesson from Yukimura sensei

Not long before Yukimura sensei passed away I was lucky to be able to spend some time with him in Ebisu.  A big part of our lessons always involved discussion.  In fact on one particular day, our discussion went on for hours after the lesson was over.

Eventually, our conversation turned to a discussion of aibunawa, Yukimura’s caressing style, and semenawa, a more intense and often painful form of rope play.  Much to my surprise, Yukimura mentioned that in his earlier days his style was much harder and much more in the tradition of seme.

In the West, semenawa has been translated as “torture rope” and has a heavy emphasis on pain.  Those who enjoy intense pain play will often describe their rope as semenawa.  Semenawa however is not quite that simple.  It is not just about hurting your partner or even causing pain.

It is a term that Yukimura used with a great degree of subtly and nuance.  In his thinking, seme is never just pain or pain for pain’s sake.  It is suffering and endurance for a purpose and as much a mental state as a physical one.  The question we need ask as a top is not just “what is she feeling?” but also “In what state is her mind when she feels it?”

The example Yukimura used was based on a simple tie:  wrists tied together and raised over the head.

He began his demonstration  by teasing the model once her wrists were tied.  He tells her he is going to touch her tits and she blushes and turns away, her bound wrists clenched to her body.  He passes the rope through a point over her head and raises her wrists, slowly and gently, slowly pulling her juban away from her body, beginning to expose her.

Once her elbows are above her breasts, just about shoulder height, he secures the rope and begins to play with her clothing, exposing her more.  This, Yukimura explains, is aibunawa or “caressing rope.”  For the model, she has the feeling she can almost protect herself.  She has the illusion that she has some control, but slowly finds she does not.  The tie (and the person tying her) are too clever and have placed her ability to demure just out of reach.  It becomes a game, an interaction between top and bottom, involving give and take.

Yukimura would frequently talk about tying loosely, to create the illusion that escape is possible.  However once the model tries, she finds the rope holds her.  But it is the freedom to explore and to move, to walk the line between freedom and restraint, that animates the session.

The essence of this style is pleasure.  It is, in Yukimura’s words, releasing a woman’s eros and playing with it.

For the second part of the demonstration, Yukimura re-positions the rope, pulling it taut and stretching the model’s hands over her head, extending her completely.  In this position, she is bound tight and unable to even struggle.

“This,” Yukimura explains, “is semenawa.”

The reason why has nothing to do with pain.  Yukimura explains that it is not the rope that is controlling the scene, it is the creation of a particular headspace.  She is exposed and helpless and there is nothing she can do.  No illusion and no sense that maybe she can move or protect herself.  Her body is stressed and stretched by the rope.  She has no choice but to endure, which, he explains, is the essence of semenawa.  Now when he touches her the emotion, response, and feeling is different.  She has no choice.  There is no play and there can be no resistance.  Now she accepts the touching with a sense of surrender.  It is something she has no choice but to endure.

The use of physical pain can be one conduit to make your partner feel that sense of endurance, but it is not the only one.  Discomfort, emotional or psychological intensity, predicaments achieved through stressing the body or positioning all can create the feeling of something that needs to be endured.

One of the exercises Yukimura sensei did with me was to go through a number of different ties to show how each could be tied in a caressing style and in a seme style.  The difference in each case had to do with the type of play in which the top would engage and the headspace it would create for the bottom.  The ties themselves varied only slightly in their construction or application, but the effect of each was dramatically different.  Even Yukimura’s one rope gote, the foundation of many aibunawa ties, can be transformed into semenawa with just a single small adjustment.

Semenawa need not be painful (though it certainly can be and often is).  It is more important that is creates a feeling of endurance and helplessness within the rope.

Aibunawa and semenawa are different methods of rope and, but more important, they are different ways of communicating your emotion, your intention, and your feeling to your partner.