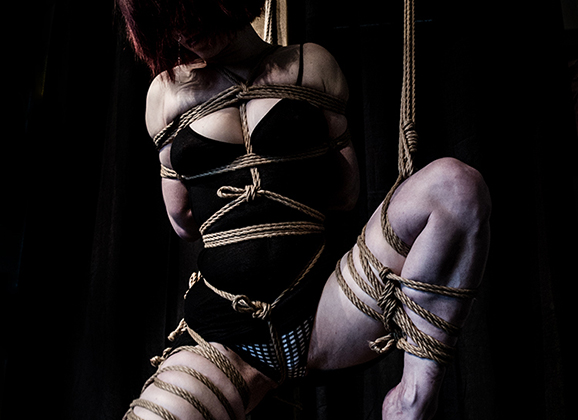 One of the most typical ties in Japan, where traditional houses are full of beams and vertical posts for the nature itself of the architecture, takes place to a vertical post, and it’s called Hashira Shibari (being tied to the vertical post).

I had the luck to experiment this in Studio6 during our lessons with Akira Naka and now that I have a portable Hashira in house, it has become one of my favorite settings.

But why this has so much fascination?

First of all, there is a main, fundamental difference with any other tie or suspension. Even when you are tied really tight and suspended to a beam, or a bamboo, you feel the space all around you. It gives you anyway the feeling that you could move a little bit, that you are partially free, for example, to sway in the air.

Just to give an example, imagine the different feeling you’d have if you were closed in a small room without windows, even without the possibility to escape, and, instead, if you were closed in a coffin: you FEEL the hard surface of the coffin walls surrounding you, you cannot avoid touching them. As soon as your Takate Kote is fixed to the Hashira, you can’t go anywhere. One of the surfaces of your body quickly realizes that not only the ropes, but a hard point limit its possibility to move, and reduces even more the expansion degree of the ribcage.

You have the strong feeling of the wooden column behind your back, and it gives you a lot of pressure, and this immediately makes you feel less free, less capable to escape.

You cannot turn a millimeter. You cannot hide. You cannot nicely bend, and take a pose. The Hashira makes the rules.

When even your legs, maybe your waist too, are attached to the post, this sense increases, and makes you feel more and more helpless.

I personally associate this feeling to two suggestions that come directly from my child and teenage imagery.

The first is related to the torture dedicated from ancient times to women accused of witchcraft. They were stripped, and tied to a pole, then eventually burned alive…

The great level of exposure that the position you assume on the Hashira produces, fastens the effect on the model. You are there, visible, you cannot adjust in any way your position, and you look like a martyr ready for the execution. The post frames you, and offers you on a stage to the sight and humiliation of the viewers in a greatly amplified way.

In conclusion, being tied to an Hashira it’s definitively a completely new feeling and dimension to space in, if you never gave a try..