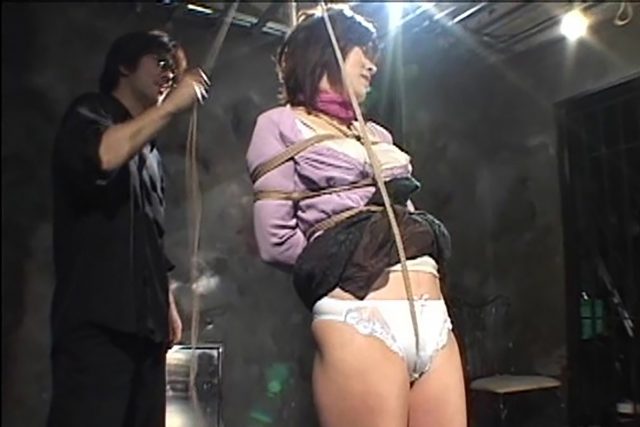 This interview was conducted by Osada Steve in 2000, and published in Secret Magazine in 2002. A German version of this interview appeared in Schlagzeilen in 2000. An online version has resided on Asanawa.com since 2000. Part one of two.

Randa Mai prefers black. Not Chrome Hearts or any of the fashionable get-ups. And definitely no fancy latex perv wear. He wears baggy pants and worn-out shirts. He sports a three-day-old beard, dons sunglasses, chews gum and removes his shoes and socks for each performance.

The latter allowing him to feel the ropes should he step on them. This nawashi (rope artist) even boasts a fourth dan in shorinji kempo, a Japanese fighting style of Chinese origin, but doesn’t look anything mildly approaching the threatening type. Randa Mai is of humble demeanor. A quiet man, he is considerate to others.

“The nawashi should stay in the background. The center of a performance is the woman who is being manipulated by rope — much like puppets brought to life by invisible puppeteers. I like to compare myself to the kuroko, those men in black that control the puppets in traditional Japanese bunraku theater.”

An interesting parallel. But what about the female fans. Don’t they want to see how the sensei, the master, interacts with the girl? How he weaves his magic? How he moves? “Well, of course, I can’t make myself completely invisible. Firstly, because of the stage (in most clubs the performance unfolds in the middle of the room) and, secondly, because of the lighting (every club has its own light show).

It has been many years since Randa Mai made the transition to professional nawashi. It’s a transition which now enables him to earn the entirety of his income from Japanese bondage. Between performances he collaborates on various film productions, an involvement committing him to more than a hundred videos a year, sometimes as director or producer, but always as actor-cum-rope-artist.

“Naturally, I need to be conscious about what the audience will see. Simply speaking, I can’t stand with my back to the camera blocking the view of the model. At live performances you often have people sitting or standing on all sides. That’s why I hardly stay in one place. Instead, I am kind of dancing around my victim all the time.” Perhaps that’s the reason for choosing Randa Mai (Wild Dancer) as his nom de rope?

“The more space I have, the larger the circles I can run and the more I can get into it.” And, indeed, once this nawashi is in full tilt, the ropes are flying all over the place, seemingly having a life all their own: loose ends are sent darting through the air, decorating customers and tables alike, drinks go a-tumbling and the female guests can’t contain their shrieking.

And what would Randa Mai say were the major differences between live performances and video work? “Live and video are two completely different art forms. With video you repeat scenes, keep changing the sets and have frequent breaks. There are cuts, new camera angles, new locations, even more cuts and then even more new camera angles.

“The actresses often come straight from the adult video scene and are being booked via agencies. They do not necessarily have a taste for bondage or S&M. In videos, the sex part takes priority, whereas bondage comes second. And, of course, you have the whole day to shoot. There’s enough time to play all kinds of games from intercourse to enemas, from whipping and cuffing to suspension bondage — all the time punctuated with a heavy dose of sexual action. You meet the woman on the set, do your thing, and the next day can’t remember her name. During the actual work there is very little room for real pleasure.”

Everything is staged, so to speak. Does this mean during a live performance everything is for real? “In a certain sense, yes. To satisfy the audience I need to send my girl on a complete journey. I can’t deliver half measures or something that’s incomplete. That’s why I only do shows with girls I know. They must be genuine masochists and I must have built a relationship with them. These are my girls and I don’t let any other performer touch them.” This is not to say his girls can’t still work and earn good money as rental slaves in clubs or pose nude for magazines or even participate in videos. But one thing is sure: a live show is a very intimate affair for Randa Mai. So how does a sensei spend his private time? “The highest pleasure is of course the real S&M play, play which is in private, at home, in a rental dungeon or at an S&M love hotel.” And as for how some of the more well-known sensei are either monogamous or married, sometimes even to a “normal” woman, whilst others cannot separate bondage from sex? “I am not so particular about this,” confides Randa Mai.

“I can spend the night with a woman without ropes or have sex with one ‘slave’ one day and with another the very next. However, nothing beats an intense relationship, an intimate partnership with an m-woman.” Suffice it to say that the number of available women dwindles only to a select handful once love enters the equation.

Does a man have to be a sadist in order to become a good nawashi? “The most important point is having an affinity towards rope. You have to love the rope. How it feels, how it smells, the sound it makes. You must fully appreciate the almost boundless possibilities it offers up for satisfying women. The rope artist must be able to listen into the woman and the communication must be there. During the bondage he is fully accountable for the woman’s physical and mental state. Why would a non-sadist ever take on such a complicated responsibility?”

Each to his own, so the adage goes. M-women included. There are those who like rope and only rope, others who like pain. Some women want to be slaves all the time, others just during play. Which would Randa Mai say was the best type for him? “There must be balance in everything. The girl must be a little bit of a slave, must enjoy just the right amount of pain, must love a lot of rope, must like kissing and tenderness, must like sex and I must like her enough to enjoy her company beyond the bedroom. She must be my friend, my girlfriend, and my lover.”

Who then are these girls that blossom under the whip and turn into almost angelic figures once hopelessly restrained? Almost all of them are “heart sick,” as Randa Mai puts it. Most are under a lot of pressure, a lot of stress, and have chanced upon a means of relieving this by submitting themselves completely for a few minutes, a few hours, a full night. Only about 10 percent of them are atama okashi (crazy in their heads) according to Randa Mai’s estimation. The majority have learned to turn pain into pleasure and almost none of them consider the rope as something intrusive or something to fear, but rather a good friend that hugs and protects their body, that makes them feel comfortable and cared for.

How about the breakdowns after a girl has endured a particularly hard session? One moment you have a mature woman in ropes, the next she has changed into a four-year-old child unsure of herself or where she is. “Things like that happen. That’s why you always need to set aside time for after-care, to huddle and to talk after a session. It can be a tough gig to bring a girl back down to earth, a girl who is crying uncontrollably and utterly helpless. But I like it when it happens. I enjoy it. And I am prepared to change it into a good experience for all.”

Upon close inspection, it would appear that the art of Japanese rope bondage is relatively limited in its number of techniques. In shorinji kempo, ninjutsu and some other martial arts you may have thousands of unique waza (techniques), but for a nawashi ? “Correct. There are only something like thirty base patterns. Of course, once you start with combinations and variations you can wind up with almost endless possibilities.”

Today’s sensei and performers may even choose to take on deshi (disciples) and one of Randa Mai’s previous students is Mira Kurumi, the great hope of the younger generation of bondage enthusiasts. Mira is pursuing an S&M illusionist approach, where he incorporates magic acts into his bondage performances. Nevertheless, Randa Mai, who prefers the term “S&M entertainer” over the more esoteric “nawashi”, is a self-taught rope artist, as, admittedly, are most of the other senior performers in Tokyo.

Can his initial curiosity with rope be put down to anything in particular? Certainly. Randa Mai explains that his first encounter with S&M came at the tender age of ten when he stumbled upon a manga book depicting a bondage scene. The rest, as they say, is history.

Even though Randa Mai has practiced bondage for twenty-five years, he readily admits that he is still learning and still busy honing his craft. After all, it is more difficult than it looks. “You need to remember that you are dealing with the comfort (or discomfort) of another human being. One small mistake and a rope with a load might slip, possibly leading to permanent marks or serious injury.”

Assuming a more or less equal number of male sadists and female masochists, there are still relatively few men who possess the skill set and technique to qualify as masters over women. As a result, many m-women are remaining unfulfilled. Is this one of the reasons why the more visible rope sensei tend to have fairly large harems of m-women?

“Maybe so. A good master must be part psychologist, part therapist. He must be able to recognize the individual requirements of each woman in order to open doors for her, to send her on pleasurable journeys, to provide relief through strict treatment.” The master as the good uncle then? “Relationships can assume many different shades. But speaking for myself, I am a very caring person, and, yes, I am providing my girls with a great deal of caring and love.”

You can find many of Randa Mai’s videos, including his instructional videos at Japanese Bound and streaming at RopeFlix.

Osada Steve is a rope artist working out of Tokyo.