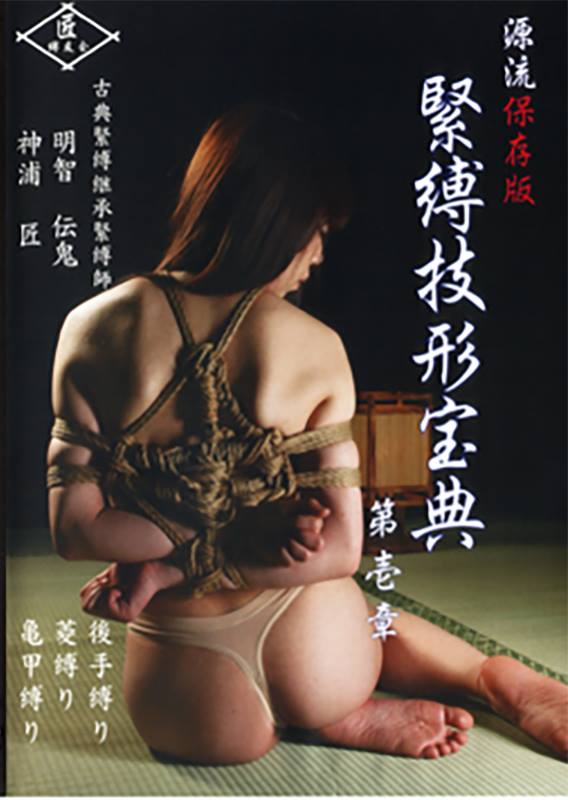 This is the first of four distinct videos filmed in 2004 (released in 2005) by the great Akechi Denki and his partner in the collaboration, Miura Takumi.  Bakuyukai, founded in 1996 by both Nawashi, is an association of bondage lovers, and a dojo with a focus on passing on the techniques and teachings of Akechi Denki’s style of shibari.  Regretfully, Miura san completed the series on his own as Akechi passed away before all four volumes were completed.  Volume 1 features both Akechi and Miura demonstrating three ties as outlined below.

Akechi Denki begins the video with his Gote shibari.  The model is kneeling in seiza during the tie, and Akechi is primarily behind her, moving as needed.  The end result is pure Akechi, a classic yet intricately beautiful tie.

The final tie is a Kikko (tortoise shell) shibari presented by Akechi.  The model is standing, and Akechi approaches her with the first rope, tying it around her neck and

working his way down securing it with knots in preparation for the Kikko pattern.

The contrasting styles of Akechi Denki and Miura Takumi’s are evident in this video.  Akechi’s ties are all very intricate, and his use of sword hilting and forming a thick stem for the Gote and Kikko shibari as well as his technique of burning each rope then securing it, and not connecting rope together to continue the tie is not often seen in more modern forms of shibari.  Akechi pays meticulous attention to detail, quite often adjusting the tie as he completes the pattern.

Miura Takumi utilizes dexterous hand movements and connects his rope as the tie is formed.  His patterns and the emphasis are on the overall tie, and he does not burn rope as intricately as Akechi.

Fans of Akechi Denki or anyone interested in studying classic Japanese shibari and learning these ties should watch this video. The camera work could be better, as the pattern of a tie is sometimes not shown when the camera angle changes from a front to rear view, often missing part of the tie which can make it challenging for beginners to follow.  Intermediate and advanced rope artists can infer or reverse engineer what is not shown based on their own experience with rope.  After each tie, a close up of the front, side, and rear is shown.

Definitely worth seeing to study the work of both Nawashi.  Based on the skill level of the viewer, it may take several viewings and practice to duplicate these ties. Watching Akechi tie is comparable to experiencing Jazz, only with rope and not music.  That being the case, viewers can come close to creating Akechi’s ties, but only he is the master of his own style.  Speaking of music, the sound goes out shortly after Akechi beings the Kikko tie and returns at the end.  It is not a distraction as most of the music is used at the start and end of a tie.  From an instructional perspective, it is much easier to follow along with Miura Takumi when he performs his ties.